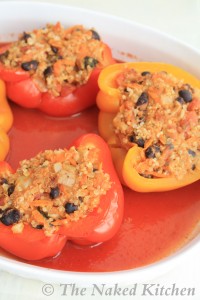 This recipe is so full of good things I don’t know where to start. Bell peppers are full of antioxidants, Vitamin C and B6 as well as beta-carotene.  Spinach is high in Vitamin K, also Vitamin C and B6 as well as folate and magnesium.  Tomatoes are rich in Lycopene, iron, potassium and a host of B vitamins.  Black beans provide a good source of dietary fiber as well as protein and antioxidants and last, quinoa.  Quinoa is a sure fire power food containing a complete protein as well as Vitamin B2, B6 and E, magnesium, iron and zinc.  This dish is a true super star.

Serving size 1 pepper half and stuffing.

Any leftover peppers can be stored in an airtight container in the fridge for  a day or two.  The peppers also freeze well.  To make a smaller serving amount simply make half a recipe.